A FIVE DAY PROGRAM AT THE UNIVERSITY OF ILLINOIS AT CHICAGO

In 1950 a visionary Doctor started his Postgrad course in Orthodontics at the University of Illinois at Chicago. Under the influence of head leaders like Drs. Allan Brodie and William Downs he devoted his Orthodontics career to expand the specialty to new dimensions. Being with very unquiet personality and possessing a great devotion to furthering the field of orthodontics, he developed the Bioprogressive Therapy Philosophy as an option and an answer to many limitations that were surrounding the specialty during that time.

Many great professionals joined his team, such as Ruel Bench, Carl Gugino, James Hilgers, Terry Sellke, Duane Grummons, Michael Langlade, Eichiro Nakajima and many others around the world, and the philosophy was stretched to a world recognized technique.

Now, years after, The Bioprogressive Therapy teaching is getting back to its origins, the Orthodontics Department of the University of Illinois at Chicago – UIC – USA. A team of professors joined this endeavor and five years after teaching at the UIC’s Postgrad program, it was decided to open a new course opportunity for professionals all around the world who want to immerse into this Orthodontics treatment modality. The Bioprogressive Therapy has a unique approach to all kinds of malocclusions and gives to the Orthodontist a comprehensive approach from growth and development, diagnostics, treatment planning and biomechanics; therefore a careful course program of modules was designed to fulfill all participants’ expectations. By joining the program the participant will have a chance to open up and enhance their clinical practice possibilities.

At the end of this five-day course, each participant will be able to:

This course is designed as a five day advanced program divided into 3 days of didactic instruction and 2 days of laboratorial exercises on typodonts.

Participants will also have a choice (as a group) to pick an additional 2-hour lecture from our guest speakers list on one of the following topics:

Dr. Oppermann obtained his Orthodontic Specialty Certificate in 1993 from Dentists Association of Sao Paulo and Master’s degree in Oral Sciences focused in orthodontics in 2003 from SL Mandic dental School – Campinas – Brazil. Dr. Oppermann has been involved with Bioprogressive and sectional mechanics studies. His connection to Dr. Robert Ricketts years ago and his presence in several studies on those subjects helped this development. Dr. Oppermann’s knowledge in growth and development of the human craniofacial complex together with Ricketts’ cephalometric analysis and diagnostics system gives another perspective to treatment planning.  He also lectures on physiologic occlusal control and mandibular repositioning while emphasizing the treatment from TMJ health perspective. He serves as an adjunct faculty member in the Department of Orthodontics at the University of Illinois at Chicago (UIC). Dr. Oppermann is an active and enthusiastic lecturer, having visited many countries giving talks on the Bioprogressive Therapy philosophy.

Dr. Sanchez obtained his Orthodontic Certificate in 1993 from the Association of Dental Surgeon’s of Sao Paulo and Master’s degree in Oral Sciences focused in orthodontics in 2003 from SL Mandic dental School – Campinas – Brazil. Dr. Sanchez has been teaching the Bioprogressive philosophy since 2004, starting the Orthodontic Program at the Dental Surgeon’s Association in the city of Campinas – SP., where he has his private practice.

In 2006 joined the Orthodontics Specialization Program at Sao Leopoldo Mandic University – Brazil as a full-time faculty on the Bioprogressive program where he taught and conducted research based on sectional mechanics associated with different growth patterns from 2006 till 2017. He was also involved as adjunct lecturer at the Department of Orthodontics at the University of Illinois at Chicago from 2010 till 2016. Dr. Sanchez has become a full time clinical assistant professor and biomechanics co-course director of the orthodontic department at UIC since August 2017.

Dr. Budi Kusnoto obtained his Master’s degree in Oral Sciences and specialty certificate in Orthodontics in 1998 from the University of Illinois at Chicago (UIC) and did his fellowship in the University of Illinois at Chicago Craniofacial Center in 1999. Dr. Kusnoto has been a faculty member involved in the implementation of digital technology in the Department of Orthodontics at UIC since 2005.  He is currently a full professor and program/clinic director at the Department of Orthodontics.  His degrees in computer science as well as in the field of dentistry/orthodontics make his contributions significant to this course. Dr. Kusnoto’s knowledge in growth and development of the human craniofacial complex is complementary to his teaching in the field of orthodontic diagnosis and treatment planning.

Dr. Budi Kusnoto also actively involved in research and teaching on the subject of diagnosis and treatment planning particularly in using Bioprogressive principles. He is involved in the development of the Modern Bioprogressive Web-Portal. Much of his work has been published in refereed journals. Dr. Budi Kusnoto is actively involved in research involving the management of craniofacial patients and orthognathic surgical cases as well as teaching diagnosis and treatment planning utilizing 3D imaging technology. He is also an active member in good standing of the American Association of Orthodontists, Illinois Society of Orthodontists, and the American Dental Association.

Dr. Mohammed Elnagar is a clinical assistant professor in the Department of Orthodontics, University of Illinois at Chicago.

Dr. Elnagar received his DDS graduating with honors as class Valedictorian in 2005, followed by General Practice Residency. After that he obtained his Certificate of specialty in Orthodontics and Master of Dental Science degree. He joined the Department of Orthodontics, University of Illinois at Chicago in 2015 to earn his PhD and later became a full time faculty member. His PhD work was a clinical trial that involved different protocols of bone-anchored maxillary protraction for the treatment of Class III patients and evaluation of the treatment outcomes using 3D digital technology. His work was selected to be on the cover of the American Journal of Orthodontics and Dentofacial Orthopedics November 2016 issue.

Dr.Elnagar has published many articles and presented his work in many  national/ international meetings. He gained memberships in many prestigious professional associations including the World Federation of Orthodontists, American Association of Orthodontists, German Society of Oral Implantology, Chicago Dental Society and the Foundation of Modern Bioprogressive Orthodontics. In addition, Dr. Elnagar is a peer reviewer for many reputable scientific journals such as American Journal of Orthodontics and Dentofacial Orthopedics and Korean Journal of Orthodontics . Dr. Elnagar is currently teaching and mentoring residents in the UIC Orthodontics clinic, and he is also practices orthodontics in the UIC Faculty Dental Practice. Dr. Elnagar employs multiple techniques to suit his patients’ needs and to help patients achieve a beautiful smile.

Born in Chicago, Dr. Terry A. Sellke is a native Illinoisan. His fervor for Illinois extends to his academic background, having enrolled in the University of Illinois undergraduate and dental school. He graduated with his Doctorate of Dental Surgery in 1971. Two years later, he achieved a specialty degree in orthodontics. In 1974 he received a Master’s degree in orthodontics.

In 1980, Dr. Sellke became a Diplomate of the American Board of Orthodontics. He still teaches orthodontics at the University of Illinois College of Dentistry, where he served as professor, master clinician, co-clinic director, and master’s thesis advisor. Dr. Sellke lectures domestically and internationally on clinical orthodontics as well as another of his passions, applying business principles to the practice of orthodontics.

Dr. Sellke was elected to the American College of Dentists by his peers and has been a reviewer for the American Journal of Orthodontics for many years. He has published dozens of articles on orthodontics in professional journals worldwide. His text on the Bioprogressive Orthodontic Philosophy has been translated into four languages.

Dr. Veerasathpurush (Sath) Allareddy serves as the Department Head of Orthodontics and Brodie Craniofacial Endowed Chair. His area of clinical expertise is Cleft Lip/Palate and Craniofacial Orthodontics and is a Diplomate of the American Board of Orthodontics. Dr. Allareddy serves as the Director of the Specialty Node of National Dental Practice-Based Research Network (www link is  http://www.nationaldentalpbrn.org/) and is a member of the Rapid Assessment of Evidence Panel and Planning and Awards Review Committee of the American Association of Orthodontists Foundation. A proponent of TEAM science, he has been successful in fostering research collaborations between multiple Universities and has published over 225 research articles in peer reviewed journals, presented over 250 posters at regional/national/international scientific meetings, and collaborated with over 300 researchers affiliated to more than 25 different Universities. He is the recipient of multiple awards including: Co-author of TM Graber Outstanding Article Award (2021) from the World Federation of Orthodontists; Research awards from Society of Critical Care Medicine (years 2014, 2016, 2018, and 2020); Peer Reviewer of the Year 2016 Award from Cleft Palate and Craniofacial Journal; Eleanor and Miles Shore 50th Anniversary Fellowship for Scholars in Medicine – Harvard Medical School and Harvard School of Dental Medicine Scholarship; and the Harvard University Presidential Scholarship (years 2008 to 2010).

Dr. Maria Therese Galang-Boquiren graduated with a DMD from the University of the Philippines in Manila in 2000, and was ranked tenth of almost 800 who passed the licensure examination given that year. After a year of private general practice in her home country, she went to the University of Illinois at Chicago, completing an MS in Oral Sciences. She went on to obtain a Certificate in Orthodontics and an Advanced Standing DDS degree at the same institution in 2007 and 2009, respectively.

Dr. Galang-Boquiren is an Associate Professor and Director of Predoctoral Orthodontics at the Department of Orthodontics, University of Illinois at Chicago.  Her experience in academia is complemented with private clinical practice and a hospital appointment as Consultant Orthodontist at the John H Stroger Jr Hospital of Cook County, Division of Oral and Maxillofacial Surgery. She is a diplomate of the American Board of Orthodontics and is Board Eligible, American Academy of Dental Sleep Medicine.

Dr. Galang-Boquiren has received numerous awards from both Philippine- and American-based institutions. In 2010 she received an NRSA Training Grant from the University of Washington Summer Institute in Clinical Dental Research Methods. Dr. Galang-Boquiren is an accomplished academician, as evidenced by her receiving the Teaching Recognition Award from the University of Illinois at Chicago’s Council for Excellence in Teaching and Learning in 2011. In the same year, she received a grant for research in sleep apnea. She has mentored over 50 dental students and orthodontic residents and has helped them with numerous research projects which were eventually presented in scientific meetings and published in peer-reviewed journals, a number of which won awards.

Because of her successful collaboration with the UIC Colleges of Nursing and Medicine in the field of dental sleep medicine, she was appointed as one of the directors of the Illinois Sleep Society and was recently appointed Secretary-Treasurer of the ISS. She has also been appointed in the Scientific Committee of the American Academy of Dental Sleep Medicine. Dr. Galang-Boquiren also reviews articles for various peer-reviewed journals such as the American Journal of Orthodontics and Dentofacial Orthopedics, World Journal of Orthodontics and Journal of Dental Education, and has been invited to present in conferences both locally and internationally.

For general information about the Department of Orthodontics, programs, residency applications, and events, call 312-996-7138.

Applicants to the orthodontic specialty program may also acquire information about application procedures via email: ortho@uic.edu or visit our web page regarding our Orthodontics Advanced Specialty Training Program at https://dentistry.uic.edu/programs/advanced-specialty-programs/orthodontics-advanced-specialty-training-program/.

University of Illinois at Chicago

A Guide to the UIC Department of Orthodontics 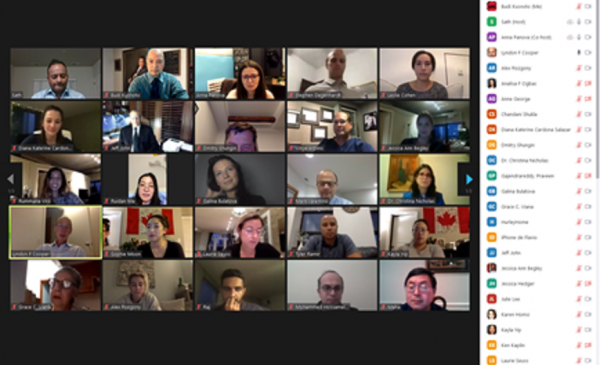 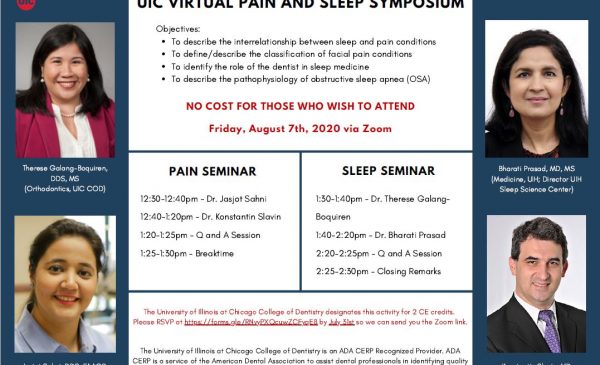 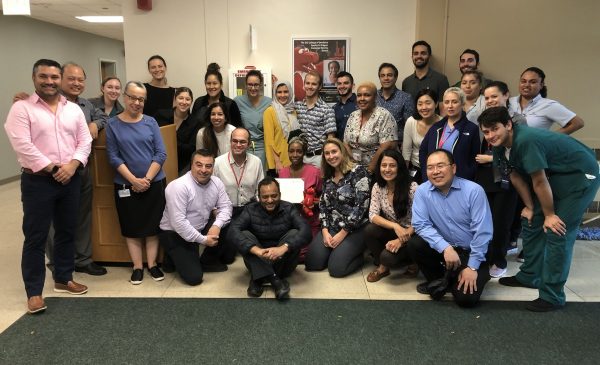