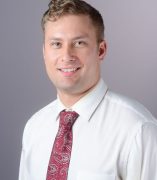 Dr. Zachary Skabelund grew up in various locations during childhood including Iceland and Texas, then eventually settled in Logan, Utah. He graduated from Utah State University in 2016 with a Bachelor of Science in Kinesiology.

From 2010 to 2012, Dr. Skabelund participated in a mission trip in northern Brazil and became fluent in the Portuguese language. In his free time, he enjoys playing and watching sports, viewing documentaries, listening to 90s music and alternative rock, and tinkering with electronics. He is a lover of animals and enjoys spending time with his fish tanks. He intends to become board certified and join private practice following graduation.