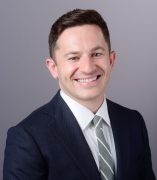 Dr. Patrick Clark was born and raised in Steilacoom, Washington, a small town just outside of Tacoma in the shadow of Mt. Rainier. He completed both his undergraduate and graduate degrees at the University of Washington in Seattle, earning a Bachelor of Arts with Honors in History in 2009 and a Doctor of Dental Surgery in 2015. While in dental school, Dr. Clark was awarded a national federal Health Sciences Collegiate Scholarship and commissioned as a dental officer in the United States Navy Dental Corps. Following dental school, Dr. Clark completed a one-year General Practice Residency at Naval Hospital Camp Pendleton in California, before being forward deployed to Okinawa, Japan, where he served a two-year tour with the 3rd Marine Expeditionary Force. Dr. Clark’s final tour as a naval officer brought him to the Greater Chicago Area, where he worked as a both dental officer and division officer at nearby Naval Station Great Lakes. Upon separating from the Navy in June 2021, Dr. Clark began advanced specialty training in Endodontics at the UIC College of Dentistry.