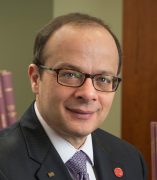 From 1992 through 2000, Mark led the College of Dentistry through UIC’s first-ever capital campaign—Campaign Illinois—and helped the program exceed its goal of $8.2 million by more than $3 million. Mark also led the College during the Brilliant Futures: Educating a New Dentist for America campaign, 2005 to 2012. The College exceeded its campaign goal of $35 million by raising $37.4 million in private gifts.

Mark has helped to raise nearly $60 million for the College of Dentistry during his time at UIC. These gifts have provided for endowed chairs, professorships, and fellowships; named scholarship funds; and renovated classrooms, research laboratories, and the renovation of the DMD and postgraduate clinics. Mark also has played a crucial role in the successful effort to engage Loyola University Chicago School of Dentistry alumni with the UIC College of Dentistry.

Mark received a Chancellor’s Academic Professional Excellence (CAPE) Award for excellence from UIC in 1999 and was inducted into the Omicron Kappa Upsilon National Dental Honor Society in 2011. He received the Bernadine C. Washington Award from the City of Chicago and the Commission on Human Relations in 1997. He earned a BA in English from DePaul University in 1980.