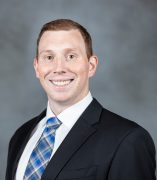 Steven Licht is originally from Pittsburgh, Pennsylvania. In 2014, he received his Bachelor of Arts degree in Business Administration from Washington and Jefferson College, where he also played football. He received his Doctor of Dental Medicine degree from the University of Pittsburgh School of Dental Medicine in 2020, where he was awarded the Omicron Kappa Upsilon Dental Honor Society Academic Excellence Award in 2017 and 2018. In his free time, Steven enjoys spending time with friends and family, playing basketball and golf, as well as trying various restaurants in Chicago with his wife. His interests outside of OMFS include entrepreneurship, real estate, fitness, and cheering on the Pittsburgh Steelers.