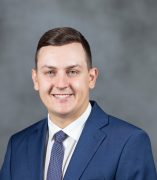 Sebastian received his DMD in 2020, graduating at the top of his class from the University of Illinois at Chicago where he was awarded the prestigious William H. Bell and Chalmers J. Lyons Awards for his achievements in Oral and Maxillofacial Surgery. Sebastian is a first-generation immigrant from Poland and is also fluent in the Polish language. He was awarded the Polish American Medical Society Scholarship in 2017 and 2019 for his involvement in the Polish American medical community. In his free time, he enjoys golfing, snowboarding and playing the piano. Sebastian is also a passionate soccer fan, who regularly loves playing in his free time.