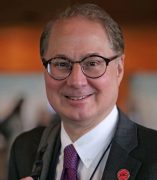 While Dr. Stanford had been at Iowa for 35 years, he is a native of the Chicagoland area, having grown up in Northbrook, IL. Dr. Stanford arrived at the Iowa City campus as an undergraduate in 1979. There, he received his BS in 1984, his DDS in 1987, and a Certificate in Prosthodontics and PhD in cell biology in 1992. He joined Iowa’s faculty that same year.

He is the recipient of 15 academic awards including the 2007 State of Iowa Regents Award for Faculty Excellence and the International Association for Dental Research Distinguished Scientist Award (2007).

Dr. Stanford treats patients for complex rehabilitation, with an emphasis in craniofacial anomalies, at the UIC College of Dentistry. Dr. Stanford led a task force of 120 global clinicians and scientists in the establishment of the first set of evidence-based Clinical Practice Guidelines (CPGs) for the dental community on how to manage patients with no teeth in the upper jaw. The guidelines were published in 2016. Dr. Stanford has won 15 teaching awards.

Dr. Stanford is the author of 20 book chapters, 117 published papers, and more than 140 published research abstracts.

Dr. Stanford's research  is focused on osteoblastic gene expression and signaling pathways. He has received research funding from the National Institutes of Health, foundations, and from industry. He currently serves on multiple national and international committees.