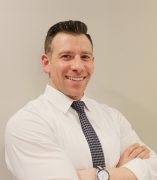 From a young age, he always knew he wanted to be some kind of doctor, but it wasn’t until he was playing mini golf with a group of friends and somehow managed to knock out a front tooth of one friend with an errant shot that he decided to become a dentist.