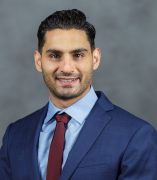 Dr. Ali Alsuhail graduated from the University of Baghdad, College of Dentistry in 2009, before moving to Chicago in 2011.

He earned his DMD after finishing a two-year advanced standing dental program at UIC, during which he was awarded the Dr. Harry Saxon Scholarship/Award for academic achievements.

After graduation, he pursued further training in Advanced Education in General Dentistry at South Texas Veterans Health Care System (STVHCS) in San Antonio for one year serving the veterans of the United States. Then he joined a private practice in the Chicagoland area for two years.

Dr Alsuhail is currently training in the UIC endodontics residency program, after which he plans on becoming a Board-Certified Endodontist and enter private practice.

Dr. Alsuhail enjoys spending time with his family, exploring the city and traveling around the world.